The game has its own unique style and every single texture is a perfect fit, the models are well made and animated. Unreal Engine 4 physics-based shaders and lightning really make everything look amazing.

The enemy animations are not something you usually see in other games, they imitate stop-motion animations from the old monster movies. They’re done really great and it’s always fun to watch them every time.

The game is meant to be played with the VHS filter on and I highly recommend to do so. After all, it’s just like the game says – the clean DVD mode is for robots. 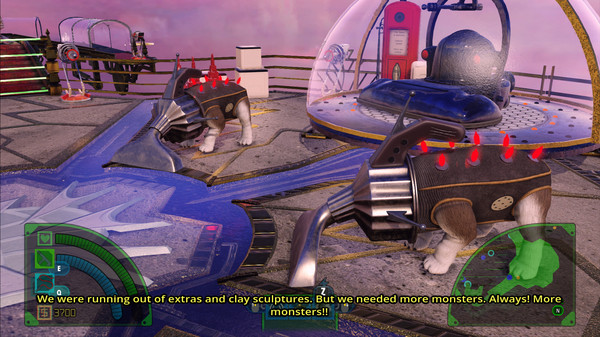 The game is packed with really memorable and atmospheric tunes. Some of them sound like a 50s b-movie of some sort, some of the cheery tracks reminded me of 90s JRPGs. I’d really like to have a soundtrack to listen separately from the game, too bad it’s not available.

The voice actors completely succeeded in what they needed to do, with robot voice being my favourite one, too bad he has just a few lines. The director is the main voice you hear in the game and he takes the cake, making you believe it’s all just a DVD commentary.

It breaks the 4th wall right from the beginning. You play as an actor in a typical 50/60s b-movie (and later as a group of three actors, but always controlling one of them) and your mission is to defeat super-mega-evil Emperor and his super-genius evil genius sidekick. Every enemy is not really an enemy but an actor in a suit, most of which work for mere cents.

While most lines were not really funny for me, they have their own charm and just pleasant to listen. It’s more like The Stanley Parable – it has the story told in a quirky way, not necessarily a slapstick comedy or something like that. 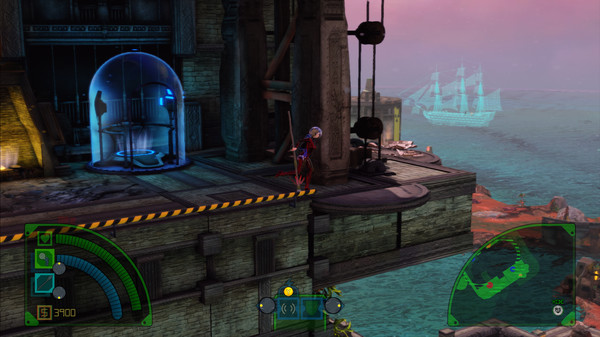 Technically, it’s a modern beat’em’up / action game. It has a lock-on system (if you’re playing with the controller), which chooses the closest enemy automatically. It not always works the way you want (causing some frustration at times), but you’ll get used to it. The camera is fixed and you can move it only slightly. You start with a weak gun and a stick, but you’re getting more and more weapons on your way up, which you can also upgrade (by finding cogs and picking up gold after fallen enemies / broken objects).

Just like the title of the game suggests, you’re climbing up the tower. And it’s a one huuuuge tower, so huge that it goes up into space. You unlock checkpoints on your way up and you can teleport between these checkpoints anytime (except when you fight someone). It’s 100% seamless and whole location makes it feel like an open world game.

You can jump from the tower whenever you want, to either land on some particular part of it or to get back to the surface or just dive through the special rings (needed to get a couple of skill points). Jumping down from the tower looks and sounds astonishing, it even has its own beautiful dreamy soundtrack and you also can shoot while diving. It feels much like the opening of MDK (1998), but here it’s not scripted. You can jump whenever you want and if you want to reach the surface, you can do so, without teleporting and in a most effective and beautiful way.
You can choose between three main characters (once you unlock them all), but the changes are mostly cosmetic. They have their own unique abilities though, but you won’t need them most of the time.

I had experienced a couple of bugs during my walkthrough. One time I stuck in the object and couldn’t do anything while fighting the enemies (cost me about 75% of health bar or so), another time the game didn’t unlock the exit and just froze on the infinite animation loop when I opened the teleport menu, which forced me to close the game through Process Manager.

But it surely is really well optimized and framerate was always high and stable no matter what happened on the screen.

Overall, it’s a must-have game for anyone remotely interested in b-movies or unusual games overall. Even if you’re not, it’s still a very enjoyable beat’em’up game.