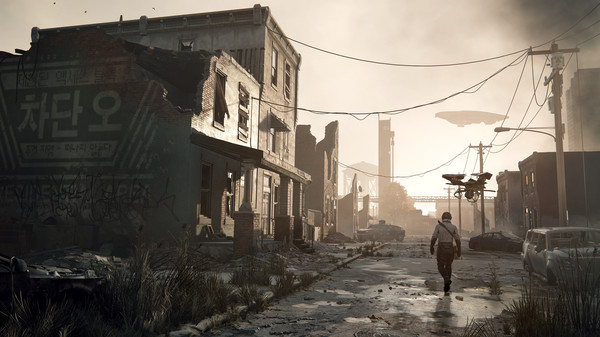 The premise is incredibly dumb, but the story itself is OK and presented very well. Cutscenes are also top-notch and these character animations add to the atmosphere. Speaking of which, the atmosphere is the most great thing about this game. You really feel like a resistance fighter surviving in the somewhat post-apocalyptic environments (just replace Koreans with Terminators and you’ll get the best Terminator game ever). These environments are also well designed and detailed, have a ton of variety in them as well.

I’ve completed the game before they released the 3rd DLC with the new patch (the one which also removed Denuvo) and it still had some bugs, not really critical, but I actually couldn’t even exit the game without Alt+F4, the option never appeared most of the time. But after the final patch it was fixed, as well many other things.
So the developers didn’t just abandon the game, they actually fixed it. I also bought it for a huge discount along with the Season Pass before the release of 3rd DLC which looked like just a promise at that time, but they actually developed and released it, despite having obvious problems with the studio itself. It was great and it had no bugs.

The multiplayer is also pretty great, IIRC I’ve completed all the maps available and wanted more after that. It’s a fun co-op experience.

Overall I like it much, much more than new Far Cry games.