Status: I will beat that last boss…later

The graphics are top-notch and look like a true labor of love. It’s a pixel art of a quality you sadly don’t see often in retro-like games, not some primitive-1bit-see-like-it-was-on-NES-old-retro-nah-I-can’t-draw-hipster BS from modern hacks, but something which you’d see in the greatest arcade hits of 90s.
The animations are crisp and smooth, sprites are very detailed and there’s a huge amount of things going on the screen, which actually never distracts and you it’s up to you to focus just on the battle or you have the time to look at the background. I think most people won’t even notice all objects / details / events on their 1st walkthrough, probably not even going through it second time. 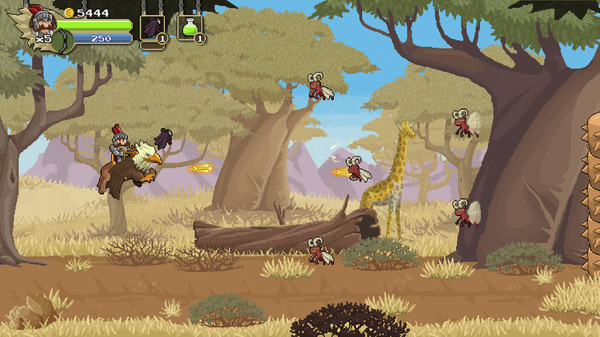 A story itself is very typical, in the beginning it even takes fun of itself and all the cliches.

The knight saves the princess from the dragon, life goes on, he becomes a fat and lazy husband. But then years later he and his allies find out that the treasures they took from the dragon’s vault are not that good for them, after all. The knight meets his doppelganger, which tries to kill him, his friend becomes a villain being under influence of the sword she took, etc.

But that “making fun of cliches” part quickly drops right after the first boss and the rest is just all kinds of variations of “I was evil because of this item, thank you for saving me, now I’m very good”. Overall the story is OK to read and I never had the urge to skip dialogues and cut scenes.

At first I thought that the sounds were weak and the music too ambientish, it surely doesn’t have that energy from combination of sounds and music in classic arcade games (Metal Slug and such). But right after the first level that feeling disappeared completely. It’s a different approach, a little bit more “meditative”, definitely not pumping-adrenaline-action-like.

Overall, sound and music do their job and work for the atmosphere. But can’t say I remember any music track after playing the game or have the wish to download the soundtrack. 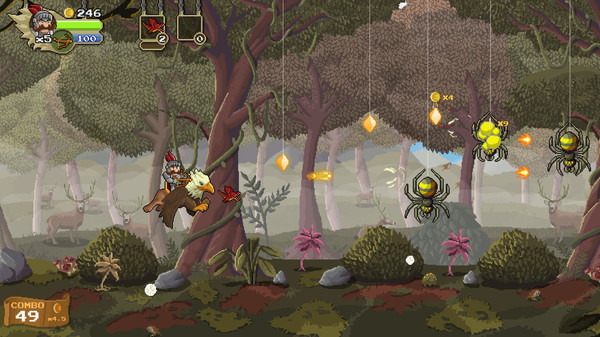 Gryphon Knight is a medium-paced shoot’em’up. You can fly in both left and right directions on your own, proceeding further or returning back (which makes some enemies spawn). The game also offers you a choice to choose a different path from time to time, combined with ability to always go back it adds a different feel to all maps, not just makes them non-linear, but also somewhat open (you’d need to find secrets and gold).
You have a standard shooting weapon (crossbow) and an alternate one, which is always more powerful, but requires a special regenerating energy to use (acts as a cooldown). You get these alternate weapons from bosses you beat and can upgrade them for money.
The first two levels are pretty easy and follow each other, but then the game drops 4 levels after them and you can choose in what order to play them. Their difficulty varies a lot and many enemy attacks start to feel cheap (take too much HP on Normal). Checkpoints help A LOT here, you can be defeated by the boss, but then go to the map, buy some things and return back to the latest checkpoint. Each death takes some of your gold, but you still earn a lot playing the levels. Still, it’s not necessary to grind at all.
The only huge downside was that in the end you’re forced to beat all previous bosses AGAIN and then two forms of a final boss. No checkpoints between. It’s a typical cheapest trick from some 90s games, which meant “MOOORE COINS, we are not done here”. It’s not really a problem and these bosses leave a bit HP after their death, but it kinda made me to drop the game. Well, at least it didn’t have an elevator level. 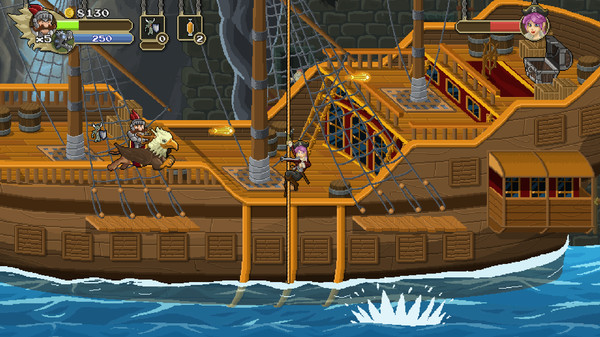 The game has some bugs, the ones which may force you to restart the level.
For example, there was an enemy which had a shield, it had other flying enemies which acted like an energy for that shield and you need to kill them all. But when I did, the shield didn’t disappear and the game became an endless loop. It worked only after I replayed the level.
I had also encountered a sound bug (before Jinn boss) which made some “splash” sound to repeat over and over again until I beat the level (almost made me press the Mute button).
Other were rather minor, like sign “Go ->” not disappearing even after you defeat the boss.

A shoot’em’up of a different kind. Beautifully drawn and animated, fun to play. But not really polished and uses some dirty game design tricks (still being player-friendly at the same time).