The original version didn’t have a manual save system, but Enhanced Edition fixed that. This game is hard to put down, but the decent save system is extremely important in such games and EE delivers just that you would expect in that department.

The character art is as great as in the Shadowrun trilogy. The animation of talking heads may seem funny to some, but you get used to it and I was more listening and reading most of the time anyway.
The style of everything else (character sprites, enemies, environments, etc.) probably wouldn’t be to everyone’s taste. It reminds me of Residue, maybe it’s the same artist. Overall the art is definitely not bad and there is an incredible amount of details, but it has that “dirty” look, so, I how said, it wouldn’t be to everyone’s taste. It’s still better than Residue, though. The animations could use more frames, but they’re also fine the way they are. 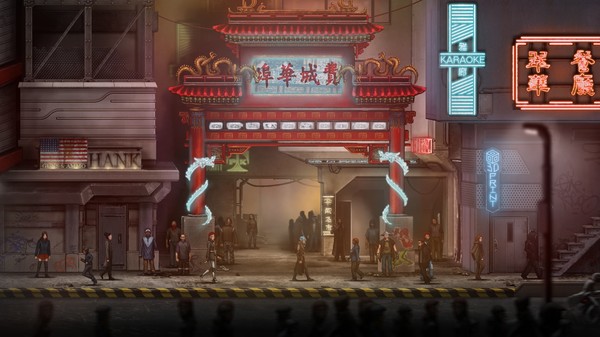 ALL voice actors did a great job portraying their characters, 100% fit. Well, maybe except Holm, but there’s a reason why he talks that way. Still, it feels like the actor didn’t understand how his character should talk like.
I always was waiting for actors finish their lines (except Holm). The voice acting is really, really good.

The music stays with you even if you’re not in the game. The tunes are memorable and fit whatever is happening in the game perfectly. It’s worth noting that they used the real orchestra to record the soundtrack.
The main theme strongly reminds me of the main theme in Deus Ex: Human Revolution and I’m kinda sure Dex theme was inspired by it.

The in-game sounds are fine and do the job. Although Dex could use a bit more sounds for jumping, she only has two of these “uh-oh” and it may get tiresome or funny when you jump a lot on your way to somewhere. 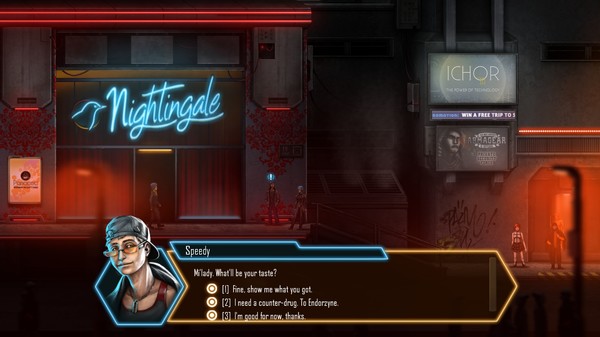 Can’t say that something original was brought to the table, you will see most cyberpunk tropes you could see in a cyberpunk media.
What’s important, is that HOW the story is told, and the storytelling is absolutely brilliant here, especially the dialogues. Each character is unique and talks and behaves accordingly to who they are, be it an Irish sailor or a fat nerd who spends all his time in the Internet. They all feel alive. Everything, from journal logs and item descriptions has the same quality of writing.
Considering it’s a game from Czech company, it’s a huge achievement, because it doesn’t feel like the game was made by non-Native speakers. No mistakes, no typos, not even a little one.

The game design here reminds me a lot about Deus Ex, well, as if it was mixed with some metroidvania (because the game is 2D). Many hidden spots and ways to approach the target, invest points in skills to be a trained melee fighter or a great gunner. However, hacking is a something you can’t skip in this game, so be sure to invest in that skill as it would be really hard without upgrading it, especially the last boss.

Speaking of hacking, unlike many other cyberpunk games, it’s made the way the arcade games in 80s were made, and it’s great. You control a small spaceship-like sprite and shoot your way through the cyberspace. In my opinion, it’s much fun than node hacking in Deus Ex: HR.

The choices you do throughout the game really matter, sometimes they even change the locations around you (besides BioTech scandal you can also bomb some locations twice in the game, which will change them forever).
There are three main endings, two of them depend entirely on what you did at the some point of the game. 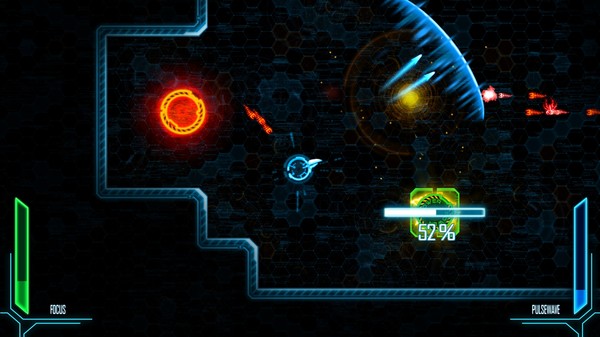 Now, the battle system. Another thing which won’t be to everyone’s taste. You get used to it though. The enemies have their own patterns which you quickly learn and react accordingly, it’s all about reacting most of the time.
I like screwing around enemies, jumping and running around, spamming that hit button to see if I hit anything this time.
The Takedown ability (silent kill from behind) is extremely important, it changes a lot the way you approach the enemies – learn their walking patterns, hack all cameras in the area and then take them down one by one without a fight.
So does the evade rolling. If an enemy has a gun and you don’t, you can quickly roll to him, land a jump kick which will make him fall down and then proceed with a series of punch combos).

It’s a must play for fans of cyberpunk RPG games and it’s quickly became one of my favourite games. It’s the game where you want to find every secret, see all quest outcomes and main endings. Absolutely recommended.