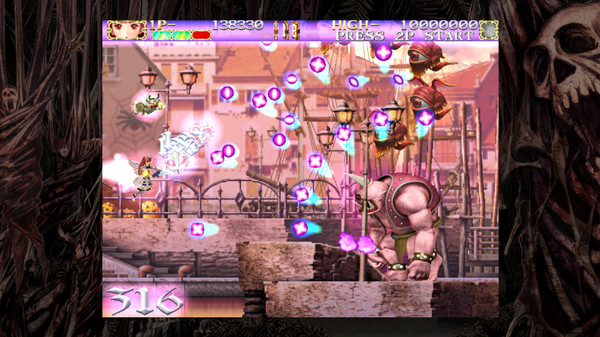 This is an enhanced port of the 2007 arcade shooter from Cave, which was also ported to Xbox 360 (and later to mobile platforms). It feels and plays like a very high quality old school arcade game.
The chosen theme here is nothing new for Japanese shoot’em’ups – witches and castles entourage, bizarre enemies and story which doesn’t take itself seriously (well, if you choose Rosa, that is), and it reminds me of games like Parodius and Cho Aniki. You will fight bosses like giant cow and giant man head, it’s that kind of game.

…is fantastic. Gorgeous art, highly detailed everything. Non-stop action, bright colors, little touches here and there. It features both pixel art and pre-rendered sprites (some of the enemies and bosses like Mary).

The controls are simple, yet not really common – you have one button to shoot right and another one to shoot left. You also have a bomb / spell which kills everything on the screen and “Targeting Magic”, which is an alternate attack which features lock-on mechanics.
Bullet hell shooters are known for being very unforgiving. But Deathsmiles has…how would you say…democracy? All stages except the last one (and the bonus one) have Rank system (difficulty level). You choose 1, you get a walk in the park, you choose 3, you get the true bullet hell.
So both groups of players would be happy – the ones who play shoot’em’ups for entertainment and the ones who play it hardcore, for scores and ranks.
Every stage is different and the game introduces new enemies with each one. I never felt like something was recycled.
Its length is exactly would you expect from an arcade game – 30-40 minutes and it’s GREAT. The replayability is there – choose different characters (all have different attacks), choose different ranks, choose a different mode, heck, choose a different ending (quite literally, you just choose the ending you want in the end of the game, A or B).

There are many options to customize your experience. Make it 4:3 or 16:9, choose background image, zoom the screen how you want, etc.
The game has framerate slowdowns. They’re not common, and they usually occur when there are hundreds objects on screen at the same time. In such games it’s something that people see as both good and bad, so it’s up to you to judge is it a problem or not.

A quality port and great game, a must have for shoot’em’up fans.